PROFILE OF THE COLLEGE

Jamal Mohamed College was founded in 1951, as an affiliated college to the University of Madras and then affiliated to Bharathidasan University, Tiruchirappalli, when it was formed in 1982. Jamal Mohamed College is situated in the central part of Tamil Nadu, Tiruchirappali city. It was established as a religious minority institution with the primary objective of providing higher education to the downtrodden and socially backward section of the society in general and Muslim minority in particular.

The college is administered by the Society of Jamal Mohamed College. It is established in a sprawling land area of 87 acres, as a religious minority institution. Hajee M. Jamal Mohamed Sahib and Janab N.M. Khajamian Rowther , of revered memory, were the founding fathers of this institution.

In the year 1957 the college got the single honor of being bracketed with the thirty best colleges in India when Dan forth Foundation of USA selected the college for the award of study fellowships in U.S.A. In 1963 the college was elevated to the status of a post-graduate college.

The College was accredited at Five Star Level by NAAC during 2002 and conferred with Autonomous Status by UGC, New Delhi and Bharathidasan University in 2004-2005. In January 2009, the College was accredited by NAAC with A-Grade (2nd Cycle) - CGPA 3.6 out of 4.0. Our College was bestowed with the unique honour of "CPE" status Phase-I and Phase-II by the University Grants Commission under the Scheme "Colleges with Potential for Excellence" in 2011 and 2016 respectively. We retained the ‘A’ Grade awarded by NAAC during the third cycle of accreditation in 2015.

The college has obtained the prestigious 59th rank among Top ranking institutions in NIRF Rankings - 2019. It is remarkable to state that the college has been recognized with Three Star status by the Institutions Innovation Council (IIC), MHRD innovation cell, Government of India in 2019. Department of Science and Technology (DST), Government of India has accorded FIST Scheme to the Departments of Zoology, Botany and Physics in 2004 and to the Department of Mathematics in 2008. Again DST FIST Scheme has been extended to the Departments of Mathematics, Physics, Botany, Zoology and Computer Science in 2019. Five Science Departments such as Mathematics, Physics, Chemistry, Botany and Zoology have been short-listed after a meritorious presentation, among many competing institutions and awarded the Star College Scheme by the Department of Bio Technology (DBT) in 2020.

Over a period of 69 years the college was able to scale greater heights and raise to the present status as a multi-faculty institution with 23 UG and 21 PG courses. 18 departments of the college are functioning with the status of approved research centres. The college has a strength of around 12000 students. There are 145 Government Aided teaching faculty and 357 staff members are working under the self finance stream. The college celebrated its silver Jubilee in 1971, subsequently the Golden Jubilee and Diamond Jubilee in 2001 and 2011 respectively.

With many milestone achievements, the College has been marching towards fulfilling marvelous plans, matching the vision and mission of our noble founders and the present Management Committee Members. “The Jamal” journey continues with all gentle Jamalians for still more greater heights of glory in higher education.

The emblem of the college consists of a shield divided into four parts with a circle in the middle. On the top left, there is a crescent and a star, a symbol of Islamic culture and faith in future prosperity. On the right, there is an open book symbolizing knowledge. At the bottom right, there is a lotus, the symbol for purity and prosperity. The bottom left represents a replica of Golden Rock standing for strength and striving. Inset in the mid-circle is the frontage of the college main building with a dome and minarets representing the essence of Islamic culture: The present is a preparation for the Hereafter. Underneath the shield is a ribbon containing a verse from the Holy Quran in Arabic Script followed by its translation in English that reads: 'Show us the right path', which is the motto of the college.

Thus the emblem of Jamal enshrines the ideals of cultural integration and guidance of learning and striving to succeed in the Here and the Hereafter, tempered with constant prayers to the Almighty to guide us on the straight path. The four figures in the shield are diagonally placed with green and yellow backgrounds, stranding prosperity and happiness.

To become a world class, highly acclaimed,innovative and competitive centre of academic and extra academic excellence in Higher Education by offering value added and socially relevant programmes to the students including minority, backward and socially disadvantaged sections of the society. 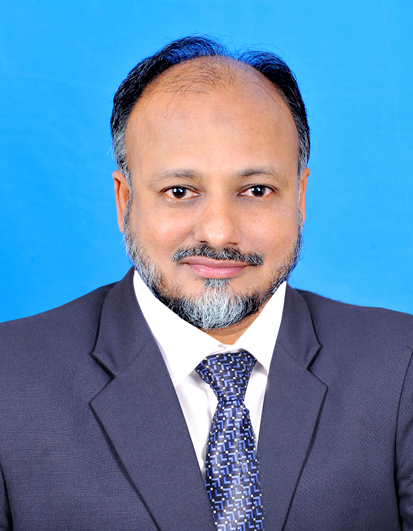 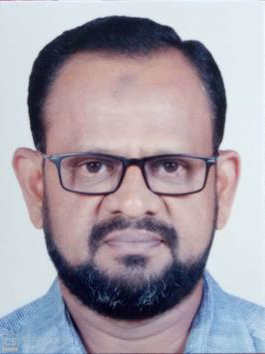 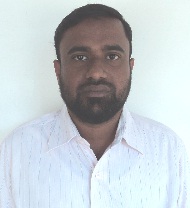 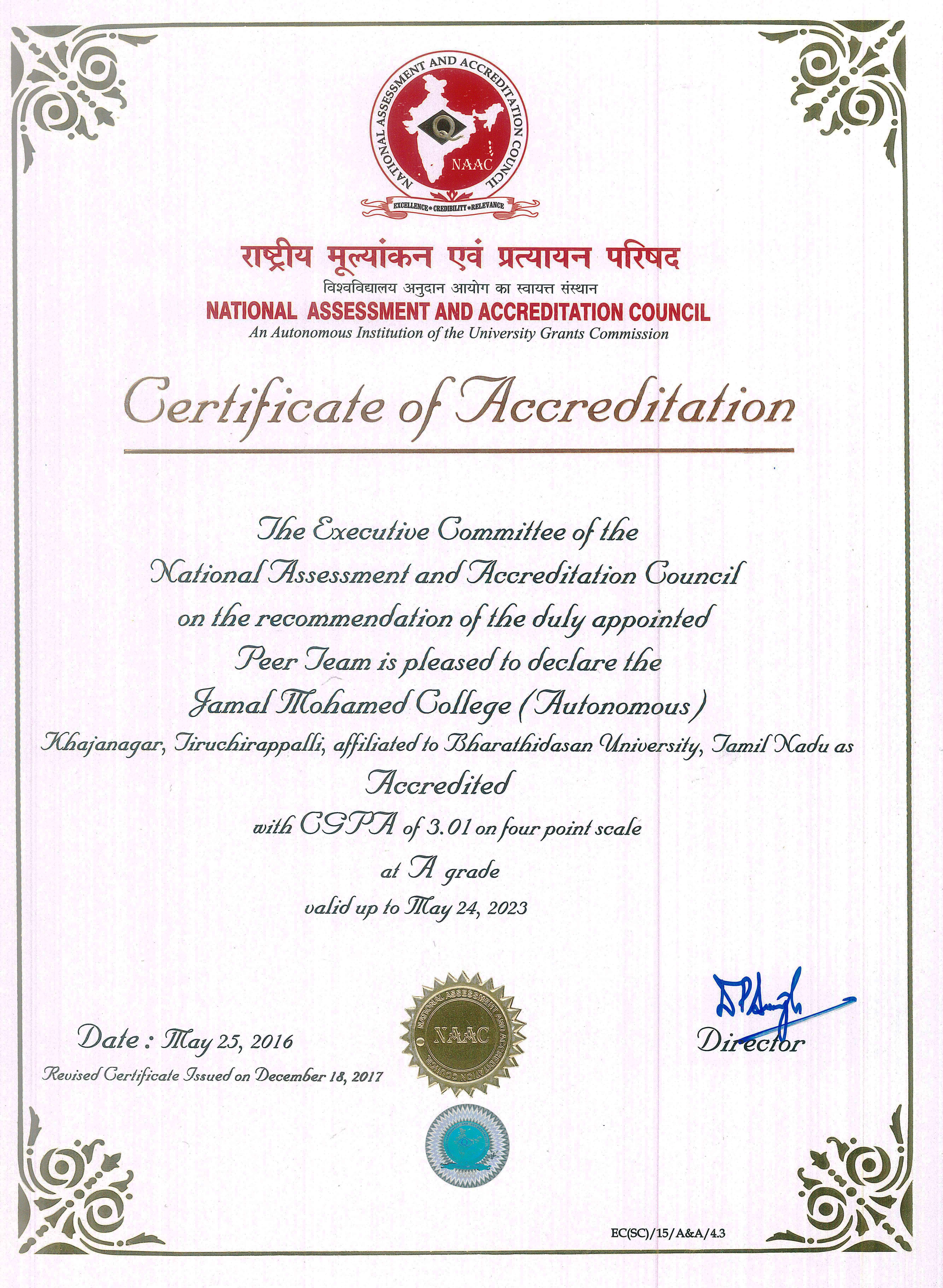 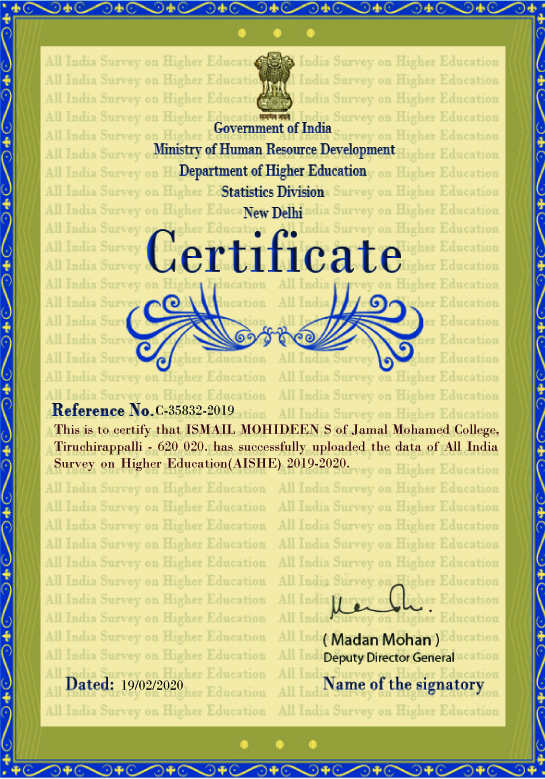 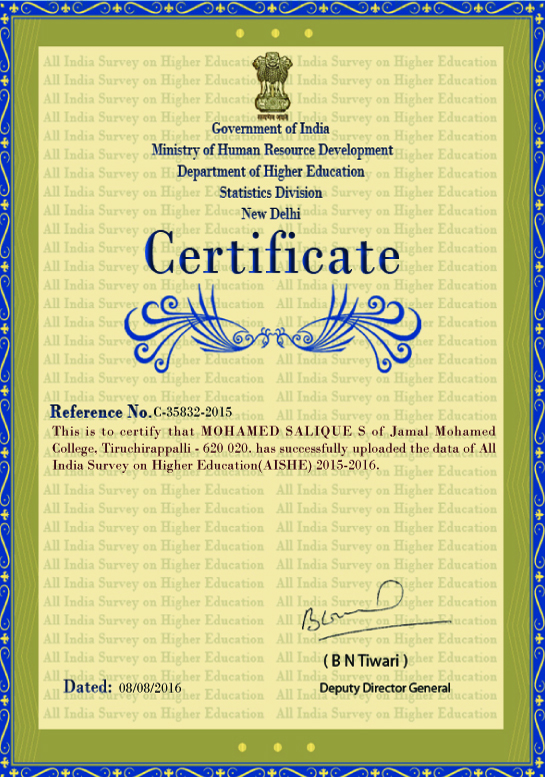 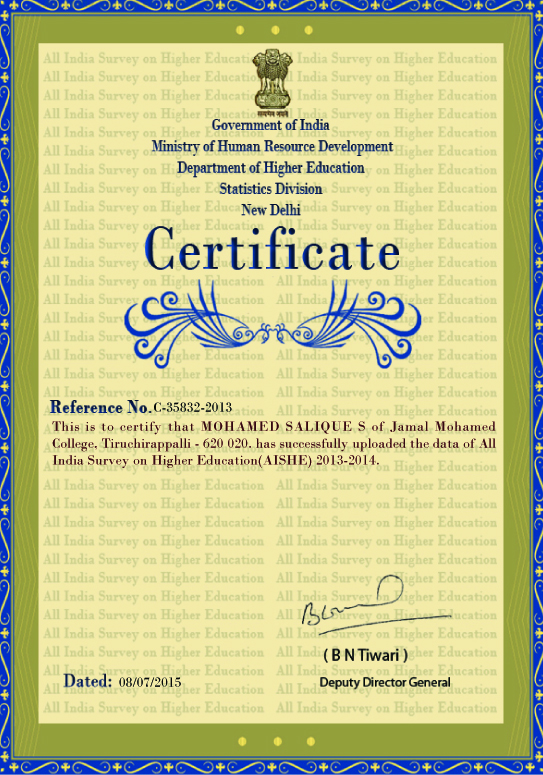 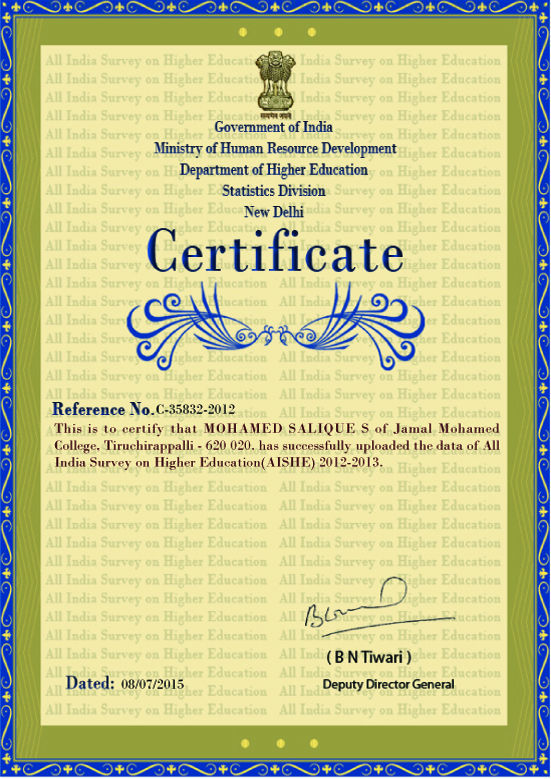 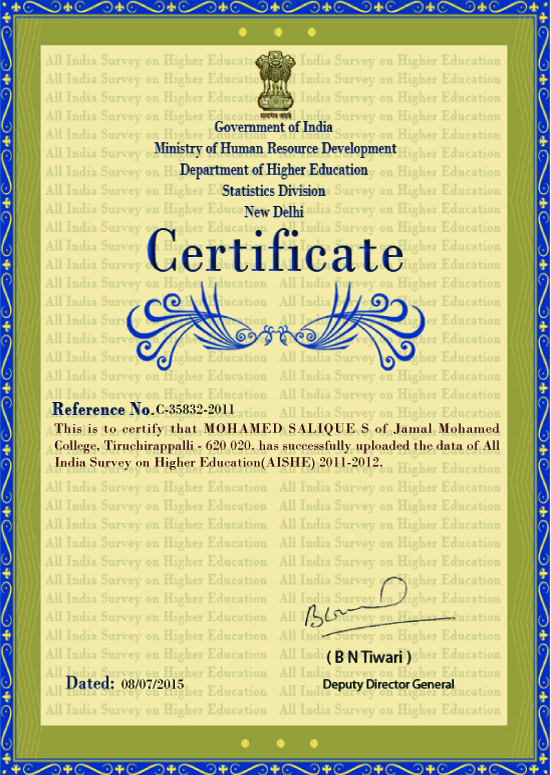 Guided by God’s kindly light
We strive to walk the paths of right
And asking, seeking, knocking find
Treasures t’enrich the mind.

Fun and Play and Team work good
Shall forge us into Brotherhood!
And strong and keen in limb and brain
we true manhood shall gain.

The ways of good JAMAL
God bless Jamal Mohamed College
The seat of Sweetness and Knowledge
Where Staff and Students graciously
Serve each other truly
Unswerving from the truth
Its progress be all smooth
Through ages yet to be. 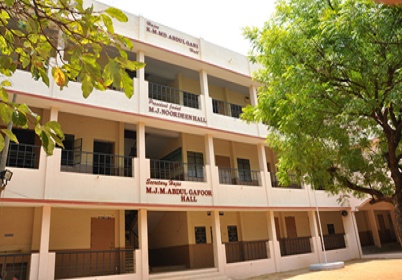